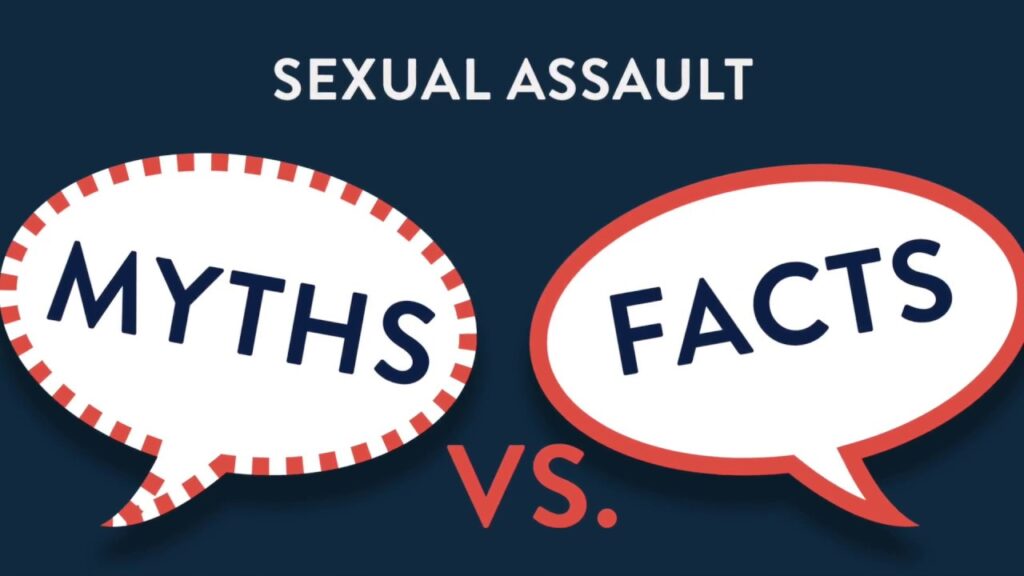 Not from editor: In this article I will be pointing out sexual assault myths , and why they are false. False information can really damage how someone thinks about sexual assault, especially someone who has been sexually assaulted.

There are so many sexual assault myths that are so false, from people that no nothing about it. It has to do that they are not open minded, and they form opinion about it based on their own beliefs. You can’t form opinion based on your beliefs when you have not gone through. Yes your beliefs thinks this is how people are after sexual assault, but you can’t really say that, especially when in so many cases it was proven to be wrong.

You hear someone from church say this is how it is when you have been sexually assaulted, or someone says I heard from this person this is how people are after they have been sexually assaulted, but have they experienced it? No, so why do you believe and listen to it? It might be possible this can be true , but this is for sure not 100%, this is not a fact. It is damaging picture of sexual assault, people see sexual assault and sexual assault victims in very negative way, and it is not like that, everyone can survive it and become better person because of it. Because of it, you got to discover your true self , and this experience shapes you to better version of yourself. So today I will be addressing some false beliefs people have regarding sexual assault:

-Women who wear revealing clothes are asking to be sexually assaulted:

Rapist don’t rape clothes, they rape people. It has been proven many times that what person was wearing didn’t matter. Children and men are being sexually assaulted so how come this happen to them, when they would never wear something too revealing. Even if that is the case, doesn’t matter I shouldn’t stop myself from wearing what I like just because someone can’t control themselves. Saying this is pushing this narrative that women are being sexualised by what they wear, and that women should be careful what they wear. Clothes are not the reason sexual assault occurs. You are making women not be able to wear what they desire, because you make it seem they are in risk so not true. 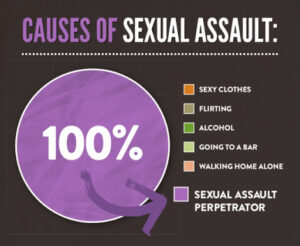 So not true men can be raped too. 1 in 6 men experience sexual assault and 1 in 4 women experience sexual assault. The number for both gender is pretty high. Don’t say that, because if it does happen for a man to get raped, he will think something is wrong with him, he won’t feel comfortable sharing this. Society makes men feel they need to be muscline and strong, and if for them getting raped doesn’t mean strong. Because of this narrative you make them feel ashamed and weak if this happens to them. It is okay to get raped as a man, rapist rape anything, because they have no control.

-Most sexual assaults occur at night in dark alleys away from others:

That is the stupidest thing I have ever heard. Sexual assault can happen basically anything. It can happen in your home, in cinema, at the party where there are plenty of people even at public places. Rapist don’t really think too much through, they don’t even think if they will get caught. So having this information if you feel something is off, get away from this situation before it happens if there is possibility to get away. 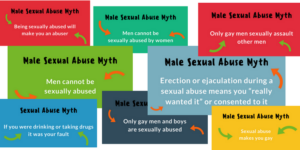 -A man can’t be sexually assaulted by a woman:

I would say it doesn’t happen as often as woman getting assaulted by man, but it can still happen. We see women as weak and men as strong, but don’t let this trick you. Women can be abusive too. And this could be even more dangerous, because they are so sneaky and you just never expect this from them. If a woman is getting too aggressive, don’t be like whatever she can’t do anything, trust me she can, so get away from this situation.

-A man who sexually assaults another man is gay:

Sexual assault has nothing to do with their sexual attraction. Sexual assault is all about having control and power. It has been proven that more men who assault another man are straight. With rapist it really isn’t about clothes or sexual attraction, they don’t even care how you look. They are just looking for this power, and the highest power to get is by sexually assaulting someone quite sad, but so true.

-If someone is drinking or taking drugs they are asking to be sexually assaulted:

Whoever said this has no brain cells. Being drunk or on drug doesn’t allow you to make good decision, so how come you think there is any different when it comes to sex? When someone is under influence they simply can’t make decision, because making decision under influence can be different from what you really want, so that means consent under influence is no consent. Having sex with someone under influence is consider a crime. No one is asking to be raped, the fact that rapist use that for their advantage is so disgusting. I am allowed to have fun, and drink instead of not drinking because there are bad people there, who would use that against me. People should drink, but rapist should not rape. 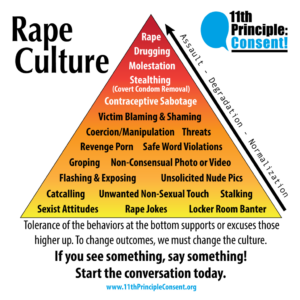 -Most sexual assaults are committed by strangers:

This is so false. In so many cases close friend or even boyfriend can rape you. I watched one woman on Ted Talk talk about how she was sexually assaulted as a child from by her parent’s friend, and it really makes you not trust anyone. They can seem like so nice, and then end up raping your child. I would just say be aware of people you are around, remove yourself when you see red flags.

-If a person did not scream or fight or has no injury, it could not have been a sexual assault:

When sexual assault happens to someone they freeze, and have no reaction. But not screaming should be good sign that is a rape, because if someone enjoys it, they will scream. It really depends, but since they don’t see it coming most of them freeze. Someone think shutting up and not doing anything about it, will make it go faster. It is weird situation and everyone reacts differently.

-Some children let the abuse go on for a long time because they like it:

Child doesn’t probably even know what they are doing do them. So for child to process this, and realise that is not right takes time. Also it might be family friend, and telling your parents this might hurt them even more, and children are even more protective of parents than adults are. A child is not fully developed, so child doesn’t know how to say it, no children don’t enjoy it, but for them is even more confusing.

We might play hard to get for example not always being available, not always seem interested, but when it comes to sex if I want it, you wouldn’t be questioning. It has to be this excitement and you feeling I really want it. As humans we understand each other without saying anything so I am telling you, you will know. You get what I am feeling without me saying it. 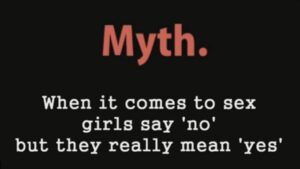 -It is a man’s right to have sex with his wife or partner whenever he wants:

As you can learn from this article rape can happen to anyone at any situation. What you been taught is very false. It is something that can happen to anyone, rapist don’t really have any rules. Bringing awareness is very important, so people are prepared in case something like this happens to them, so they can prevent this from happening. Sexual assault has become big problem in our society, and we have to work hard to fix it. I would say bringing awareness, and talking more about it will help.

9 Ways to get over sexual assault