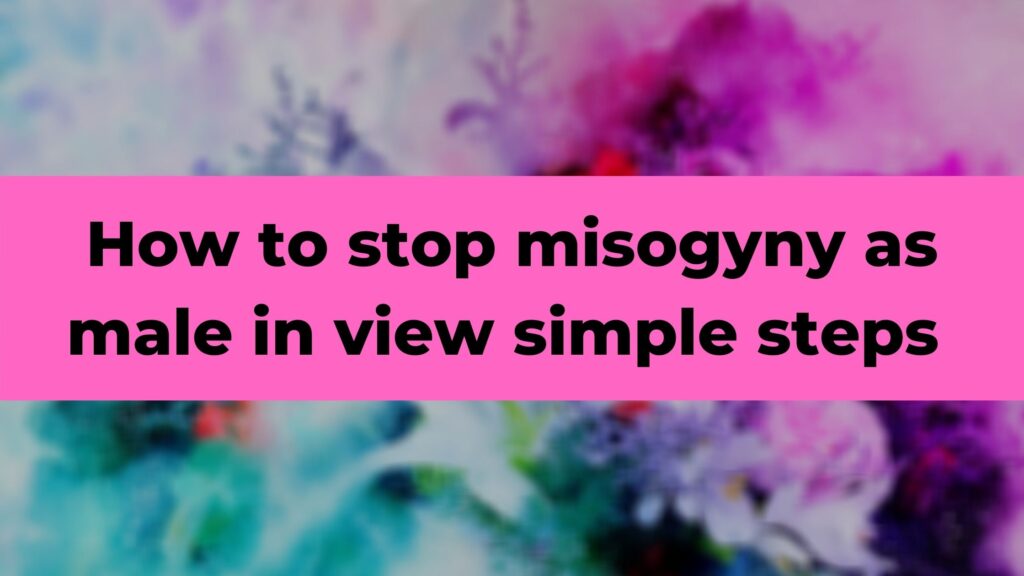 One of my lovely followers

took time to reach out to be and asking me to talk about this topic as she read something on Quora. Thank you to @ryukiiyo to reaching out if anyone has any request you are more than welcome to reach out to me. So misogyny is big problem in our society so what is it?

According to internet misogyny

means feelings of hating women, or the belief that men are much better than women. For example when someone says women belongs to kitchen or saying a woman will never being successful in her career just because she is simply a woman, it can even be a male touching a woman without permission. Misogyny is something that our society created by treating women so poorly. When people are taught women are less, they will also treat them this way, but we can always correct this. And 2020 is perfect year to do this since we have been going through a lot of changes so why not also push for this change as well.

So my lovely follower

was kind enough to send me screenshots of Quora thread, where someone asked  how do you as a man deal with misogyny. I feel as a man who is aware that women are being treated poorly, you for sure should do something about it. As a man in our society you do have a lot of influence so don’t stand and be quiet, do something about it.

So let’s go over what people answered: 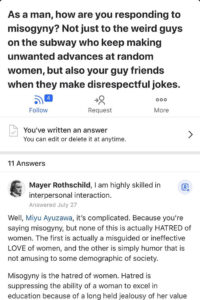 Maybe in your eyes

it is not hatred towards women, because you yourself never experienced it. But making unwanted advances is very disrespectful in my eyes therefor you see women as less and this is one form of hatred towards women. Actions can be as much hateful as words can be. I don’t care if this is meant to be a joke, some thing you shouldn’t be joking about. Learn how to joke, what is okay to joke about and what not. Think about would you tell this to another man, if the answer is no then don’t say it. 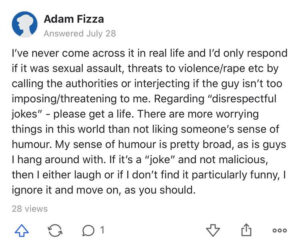 How about you get a life, 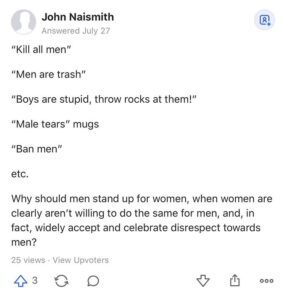 Most women don’t hate on men.

I don’t support disrespect towards both men and women. I never say that men are to blame how women are being treated, it is society and not men. Some people get it wrong and think society means men. Men are as much powerless in this situation as women are. Only hateful and close minded women would say something like this. Men should try to help, because as I said men really do have a lot of influence in this society. Plus misogyny is performed by men so if other men show that they should stop it, they might listen.  It is not about they won’t help us so we won’t help us, it is about doing the right thing, because you don’t want to live in society where women are being treated so poorly. It is about being a bigger person. 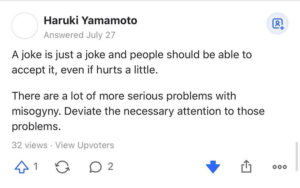 When the joke is hurtful

I can’t really call it joke anymore. Remember joke is suppose to be funny, and if joke becomes hurtful sorry to break it to you, but that was never a joke to begin with. The gaslighting of misogyny is just not okay. Misogyny is as seriously as any other person, because it hurts people’s feelings.

Women are not asking men

to hate their gender. Everyone should love and respect everyone. We are simply asking you to stop behaving sexist towards women. It was all good when we didn’t say anything, but now that we are saying something we are the bad guys. Treating someone poorly based on their gender is not acceptable.

It is great that she

is standing up and yelling at them, but don’t just stand there do say something too. As I said if that comes from a man it will be a bigger influence on them to change. As a man you can help bring good change and end the sexism. Also I don’t know why she is called crazy, when she is just annoyed by how poorly she is being treated put yourself in her shoes. 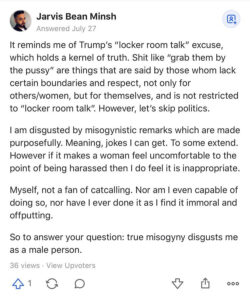 I totally agree I do 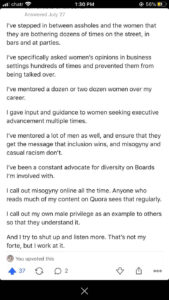 This is the right way to do it.

This is how as a male you can help stop misogyny. Make women feel their opinion matters and help them grow. And make other men aware how misogyny is bad and that they shouldn’t do it. And you should for sure call other men out if when are being disrespectful towards women. All of this can really help out with stopping the misogyny. 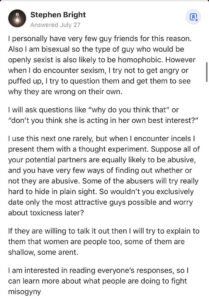 will not help, it will just make them do it even more. Some are just not even aware that what they are doing is wrong. So explaining to them why it is wrong can really help them shift and not do it anymore. I think this is really great advice how you as a male can help stop misogyny.

So here it is.

As you can see there are quite different opinions, but some opinions really are not true. Of course everyone has right to have their opinion, but some things just make no sense. The reason it doesn’t make sense is because they also know the behaviour is not okay, but don’t really want to admit it so they turn it around. Making someone feel uncomfortable and being hurtful towards someone is not a joke even if it was meant as a joke. When you hurt someone’s feelings it is not a joke end of the story. Don’t turn it around and make us look crazy. This behaviour needs to stop. As a male you really can help to make a better change. Some people did give us great advice how you as male can help stop misogyny.

When it comes to misogyny

bring awareness to people is really important. Making them aware why this is wrong, will help people shift and stop doing it. Also calling people out for doing it is also really important, but just try to do it in nice way this will make them listen. Anger won’t make them listen. Give women a chance to be heard this way they will feel more comfortable to call out people who are treating them poorly. Give them a chance to grow in career as well, so they feel they are good too. These are all simply thing that will have big impact on change so please apply this to your life.

Misogyny has been big problem in our society so it will take all of us to stop it. Be part of beautiful change.