Note from Editor: This article shows example of sexism in marriage and how bad that can be. No one has right to treat you badly because of your gender.

What does sexism actually mean?

behaviour that has no manners. Thinking it is okay to treat someone like they mean nothing because of their gender is disgusting. It is not right to make someone feel less, because of who they are. We all deserve the best, and we are all the same, so no one is better than the other. You are not going to make me do your dirty work, because our messed up society decided we are only here to serve others. Of course it is our society’s mistake, teaching women as well men, that women are worth less, that women are just here to serve men, but no that is not true. Women are enough, and are more than what society sees us, and this behaviour is not acceptable.

be in wrong, but you live in modern world, where you can think for yourself, and see how wrong this is. But why would you when you don’t have to do a thing, why would you when this enables you to treat women like shit? Men, who are sexist don’t see how bad this it is for a woman, they only see so many advantages they are getting from it, and they could care less how woman would feel. Sadly these men do end up marrying wonderful women, and for women this type of marriage can be horrible, and can also mentally effect a woman in a long run. So today I will be showing horrible, but also great example of sexism in marriage, from which all of us can learn something from.

Warning: I do have to mention if abusive and  aggressive behaviour trigger you, please stop reading this. 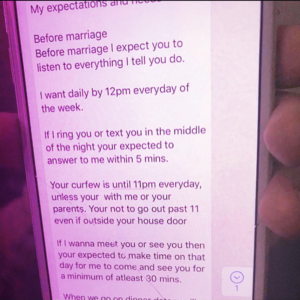 No, she is her own person,

she won’t listen to you. She is a grown person, and she is allowed to make her own decisions. Are you crazy? She won’t stay up all night incase you write her, because she needs her sleep and she also won’t let you control her. This is perfect example how they treat us like we work for them, we need to be available for them 24/7, no honey you are not only thing in my life and never will be. Is she like 10? Are you like her parent? No so she can do whatever she wants to, and she can come home when she wants to. Acknowledge that she is real person and give her so respect! And again no she has other things in her life, and sometimes she might not have time, and you need to be okay with that.

Example of sexism they think they can control us, and this is great example for that:

-She needs to listen to me

-She has to always be available for me

-I set rules for her

-I make decisions for her 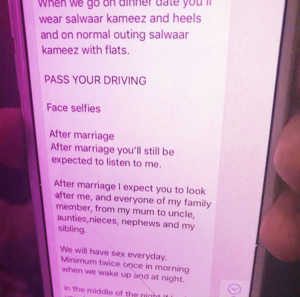 She will wear whatever she wants to,

because it is her who will be wearing this. Why would she wear something she might not like? She deserves freedom so shut up, and stop telling her what she will wear. She can do driving test, but she doesn’t have to it is all up to her. And no she doesn’t own you anything, that also includes face selfies. This is another thing feeling they own us, and we have to give them what they ask us. She is not your child, so you won’t listen to you, a healthy marriage is both sides have their own point of view, it is not one sided. Who gives you the right to treat her like she works for you? Taking care of your family, aren’t you suppose to do this?

But see he can’t

do this he is too weak, but yet she has to do this! Of course someone else doing your job pretty great, but it makes you also horrible person. She is not going to have sex everyday are you crazy? Sex is about love, and about give and take, and this sounds more like you getting what you want. You also know that even though you are married this can still be rape? Because you force sex on someone this is rape regardless of relationship status. But they don’t think this deep, they think I can force her to have sex with me as much as I want to. She basically works for me, so it is expected of her to do this. They are getting what they want, and they could less how she feels about it, just awful.

-Expecting certain things from feeling he owns her 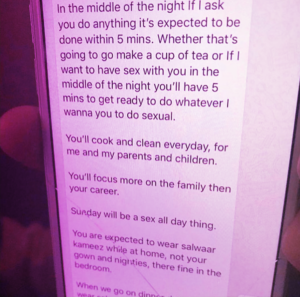 This is so crazy to me!

She is not your slave or someone who works for you. She is real person, and she needs to sleep let her sleep. This is is disrespectful! But again he thinks she can be available for him 24/7, he doesn’t worry about her health at all. Not having enough sleep can lead to health issues, but he doesn’t care. And she can cook and clean, but you will do that too.

Get your stupid ass up,

and do something about it. She won’t be your parent’s slave, she doesn’t have to  help your parents. But see another example, them getting advantages, not having to do a thing, and allowing themselves to order someone around. And no, she can focus on both, and she can have successful career if she desires. She is also allowed to say no to children, and yes to career, because women are allowed to be successful too. You won’t force her to do thing, if she feels like having sex cool, but she is also allowed to say no. You won’t be telling her, what she will wear as I said, she will be wearing this not you.

-She needs to do his work again like a slave 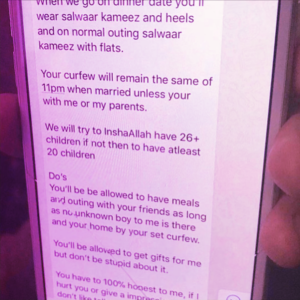 As I said before

she can be outside as long as she likes to, her own decisions. First did you ask her if she wants children? And second was it discussed between both of you if that is how many children you both want? Because having children takes two, and it needs to be something you both want and here again one sided. Her feelings are not crossing his mind it is just about him. And she can be friends with whoever she wants to, and she can go out with her guy friends too, and you can’t say anything about it. And how about she can give you what she wants, and you should be grateful for anything she gives you. What an ungrateful asshole.

-Not considering her feelings and what she wants

-Telling her what do you feeling he owes her 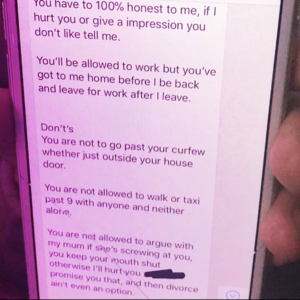 Wow amazing you are

allowing her to work, but she has to be home before you are home. He is basically making himself look like a good guy by allowing her to work, but yet making it quite impossible to work. What is wrong with you? She can’t decide from till when she works, it depends on how much work she has. It is so disrespectful to say something like that. It is so sexist to say she has to be home before you, you don’t get to decide that, her job and she decides this. Making himself seem like good, but not giving her a lot of choice is very manipulating. Another sexist example, they will limit your opportunities into being successful, because they can’t handle woman being successful.

They have this idea

in their heads that women should be at home. And he just has to keep mentioning, she needs to be home at this certain time like shut up, no she won’t. Who are you to tell her till when she is allowed to walk? The only person who is allowed to make decisions on that is her. She will argue with your mom, if she is being abusive towards her, because she is going to stand up for herself. A real man would stand up for his wife, if his mother is being abusive.

You are not going

to tell her to shut up, if your mom is not being nice to her, you should be ashamed of this. He has to shut her up, and make her feel shit can’t stand up for herself, to he feels he is a man shut up. A real man appreciates powerful woman. And forgot about the first part how is she suppose to be honest with you, she can’t even me herself around you, you tell her how she should be? Shut the fuck up!

Another example of sexism:

-Telling her what she should do

-Not letting her be successful in career 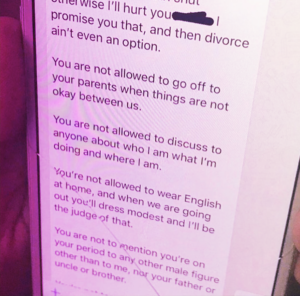 Divorce is always an option

when a marriage is not working for her, because you are sexist prick, she will divorce your ass. Girls I wanted you let you know never be afraid to divorce, because if a marriage is not making you better person, don’t be afraid to get divorce. And yes she can do what she likes to, and that could be go to her parents. She is not your prisoner, she will do whatever she likes to. In his mind freedom is not an option.

her what she can talk about. If you are ashamed of yourself I suggest you work on that. See he is just controlling what she says and has no freedom. I like to see his reaction, when she tries controlling him! You have no right on option on clothes she wears, it is something she is wearing, so step back. And she can openly talk about her period, because it is part of her. Period is anyways not talked about as much, she can share her experiences with male figures. Another sexism example not acknowledging period, even though thanks to period they are here.

-Making all the decisions

-Basically deciding who she should be as a person

-Not giving her any freedom 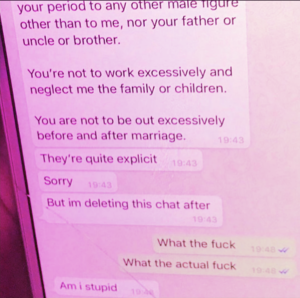 She is very much allowed to work and chase her dreams. Life is not just about having family, it is about making your dreams into reality. She loves to work let her do it and support her. But of course sexist men can’t handle woman being more successful than they. Sexism protects their egos, so that is why they love it so much.

This is so awful and so not right, but also perfect example of sexism. You are not going to treat her like a trash, you are not going to tell her what she can do. You are. not going to make decisions for her or not allow her to do certain things. Women are allowed to make their own decisions, because men can do that too. Women can do all things men can. We are all the same so treat us the same. We are not weaker gender, we are both strong. This is just so disgusting and not true. Get it into your head we are not here to serve you, we are here to achieve something beautiful. Let’s stop thinking this way, women can and are allowed to do all the things that men can do! Learn to accept that women can do everything men can! Let’s support and love each other